Hitching Arts in Health on the Road to Nowhere

Published by mdiclhumanities on December 20, 2013

Mike White writes: The country road in Australia is mostly A to B straight on and can seem to traverse interplanetary distance.  Crossing the aboriginal lands of ‘first nation’ people, however, it is a road to nowhere as highlighted in John Pilger’s provocative TV documentary Utopia that aired on ITV this week. 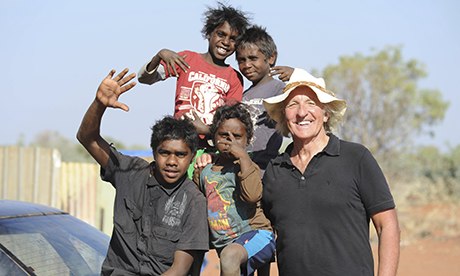 Photograph: Dartmouth Films via The Guardian

I had thought until now that the complex and inter-related social problems afflicting the indigenous population would require a gradualist process of reform in order to stay on track. The greater knowledge and experience of Pilger says, however, that this is a hollow agenda and that Australia must cut the crap and acknowledge that it is an affluent nation with the resources to redress the plight of 3% of its people, or else a state of apartheid persists which threatens a genocide of racist blame and neglect rather than reform. It is a harrowing film though one I can find fault with, particularly in Pilger’s well-worn style of letting an “ain’t it awful” polemic overtake an appraisal of what practically needs to happen.  He prefers to try-and-fry the hand-wringing politicians while allowing academic commentators to observe that whilst Aborigine culture does not readily respond to neo-liberalist intervention, an international aid approach is urgently required to address the problems at their root.  More could have been made in the film of the current context of the corporate exploitation of lands with reference to the ‘fly in fly out’ work practices which also impact on the stability of communities and the family health of the majority population.  Mandela’s astute observation that a consummately oppressive state afflicts all its citizens carries a health warning Down Under too.

I have come to care for Australia in heart and mind since spending a good part of 2007 as Healthway WA’s first international arts and health fellowship.  I have returned several times since to progress exchanges of research and practice and support the mission of Arts and Health Australia.  It has been an opportunity to cross-influence the development of community-based arts in health within cultural minefields, though on my part it has sometimes felt like I’m pouring a quart of ideological lather into a pint pot for Foster’s Lite, an ‘amber nectar’ of no-one’s choice.   I am awestruck by the commitment of many Australian artists, and organisations such as DADAA, to finding creative solutions to the health challenges presented by ‘first nation’ people.  The learning curve offered by their example has great potential for tackling intractable health problems in disadvantaged UK communities.

I have always been a great fan of Pilger but his cynicism puts me off seeking his autograph.  My crappy Foster’s glass is at least half-full and I have the pathological optimism to see that community-based arts in health in rural and outback Australia can make the tiny steps of cultural engagement that resonate with indigenous people.  Recent international meetings I have convened to reflect on international practice (see my previous blog post) have concluded that seeking social justice is a key component of community-based arts in health. We in this hybrid and emergent field can make a difference through a kind of homeopathic activism that locates the poison in a system and addresses it with a natural remedy that both respects and helps re-shape creative traditions to deal with real problems. The ‘healthy living’ stories we generate and exchange are the basis for an international practice and make for fascinating applied research. If Australia may one day before the eyes of the world memorialise its eradication of the appalling inequalities of apartheid thinking presented in Pilger’s film, a competent signer for the ceremony may well be found in the arts in health sector.

Hannah Newton – keynote speaker at this year’s Congress of Northern Network for Medical Humanities Research – gives readers a taste of what to expect from her upcoming talk: Horrible histories are not just for young readers: Read more…

In late April, the 2018 International Health Humanities Consortium Conference happened in the palm-treed glamour of the Stanford Medical School. It was my first major medical/health humanities conference, and I was really encouraged to see Read more…

“25 Years of Madness and Modernism” A review by James Whitehead

I first encountered Louis Sass’s Madness and Modernism about a dozen years ago, when I was studying for an MA in modern literature. I had always been interested in writing about madness and the psyche Read more…